"It takes a big heart to shape little minds." 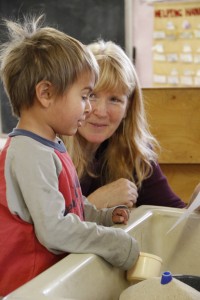 KERRY MALLOY - DIRECTOR AND TEACHER
I have been the teacher and director of the Lincoln Cooperative Preschool since the 1997/1998 school year. Prior to that, I was a “preschool parent” for four years and occasional substitute at the school. My three sons all attended the preschool with my third having “mommy” for a teacher. I provided childcare in my home for just a few children as a stay at home mom for 8 years before starting at the preschool. I also had a summer camp for my children and their friends for a number of years in my home. Out of college, and before children of my own, I worked in the alternative energy field, and was a pumpkin farmer, high school substitute teacher, and certified ophthalmic assistant.
I grew up in the suburbs of Long Island, NY, one of 4 children, in the early 1960’s in an environment where children were given freedom to move through the neighborhood all day and expected home for dinner. My days were filled with play at friend’s houses, in the woods between neighborhoods, at the nearby beaches, on bicycles and roller skates all over town, and in large group games on the quiet streets in the evenings. I believe this background is part of the reason that I love seeing the group play that happens for the children from rural towns coming to the preschool.
I came to Vermont because I found a copy of the Sunday New York Times Magazine in my high school cafeteria with an article about the New Alchemy Institute on Cape Cod where they were developing solar and wind energy systems. My guidance counselor found a school in Vermont that offered courses in alternative energy, Goddard College. I spent a year at Goddard and then completed a Bachelors degree at Evergreen State College, in Washington State where I continued alternative energy studies and majored in environmental science. It was a booming field in the very early 1980’s which ended when energy tax credits were cut and oil prices dropped. I returned to Vermont after college and have lived here since 1981. I have been going to early education college classes, workshops, and conferences throughout my teaching career. I completed a two year graduate school program and received an Early Education teaching license for birth to third grade in 2010. If I complete four more classes I will have a Masters degree.
I am happily re-married, have 3 sons, one step daughter, and 2 step grandchildren. I have lived in Lincoln since 1989. My husband and I have been doing renovations together on our house for many years. I enjoy gardening, sailing, biking, skiing, and reading books in my time outside of work. I am ambidextrous (using both brain sides) and have always felt my interests split between science and art. I won the senior art award in my high school then did mostly science in college. I have had periods in my life when I create folk art, mostly when I have enough time, and know that exploring that creative spark is my true favorite activity. I am looking forward to getting more into creating as my house project and my years as teen chauffeur are ending. For now I get to be creative at my school work developing ways for young children to thrive. I get great satisfaction from my work teaching preschoolers and look forward to being with the children every year.
LAURA HANNAH - ASSISTANT TEACHER

I have been the assistant teacher at the Lincoln Cooperative Preschool since 2014. The preschool has been a part of my life since 1986, when my first son began school.  I became the teacher in 1989 when my daughter began school and taught until my youngest son moved on to the Lincoln Community School.  I moved on with my children to the Community School and worked there until 2002, when I took some time to take care of my mother who suffered from dementia and my husband who had cancer. I have now come full circle back to the preschool and am so happy to be a part of these wonderful children's lives.
Proudly powered by Weebly